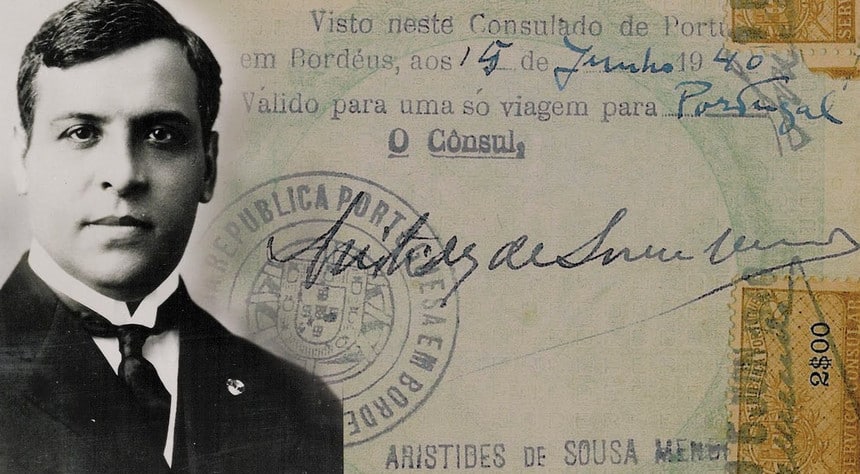 June 2000 marked the 60th anniversary of a massive rescue operation which took place in Bordeaux, France, and was orchestrated by Aristides de Sousa Mendes. He was born in 1895 into an aristocratic Portuguese family.

His father was a Supreme Court judge. Aristides chose for himself a diplomatic career. After filling posts in various capitals (the United States and Europe), he became the Portuguese consul-general in Bordeaux, France. In May 1940, with the onset of the German invasion of France and the Low countries, thousands of refugees headed for Bordeaux, hoping to cross into Spain, in advance of the conquering German army.

Included among the many who feared the wrath of the Nazis because of previous anti-Nazi political stances, were to be counted thousands of Jews who hoped to transit via Spain and Portugal, in the hope of reaching a safe haven across the seas, far from the Germans and their pronounced antisemitic policies. At this critical juncture, the Portuguese government, headed by dictator Antonio Salazar (who also filled in as Foreign Minister), forbade the issuance of Portuguese transit visas to all refugees, and particularly to Jews. This virtually also closed the Spanish border to the refugees.

Against the grim background of France on the verge of collapse, and with the Germans within striking distance of Bordeaux, in mid-June 1940, Consul-General Mendes came face-to-face with the fleeing Jews, who pressured him to urgently issue them Portuguese transit visas.

Rabbi Haim Kruger, one of the refugees, told Mendes: “If we should be trapped here, I don’t know what will happen to us.” The rabbi rejected Mendes’ initial offer to issue visas only to the rabbi and his family, insisting that visas also be issued to the thousands of Jews stranded on the streets of the city. After further reflection, Mendes reversed himself and decided to grant visas to all persons requesting it. “I sat with him a full day without food and sleep and helped him stamp thousands of passports with Portuguese visas,” Rabbi Kruger relates.

To his staff, Mendes explained: “My government has denied all applications for visas to any refugees. But I cannot allow these people to die. Many are Jews and our constitution says that the religion, or politics, of a foreigner shall not be used to deny him refuge in Portugal. I have decided to follow this principle. I am going to issue a visa to anyone who asks for it – regardless of whether or not he can pay…

Even if I am dismissed, I can only act as a Christian, as my conscience tells me.” It was an unseemly sight as people of all ages, including pregnant women and sick persons, waited in line to have their passports stamped with the Portuguese visa. The reaction of the Portuguese government was not long in waiting. Two emissaries were dispatched to accompany home the insubordinate diplomat. On their way to the Spanish border, the entourage stopped at the Portuguese consulate in Bayonne. Here too, Mendes, still the official representative of his country for this region, issued visas to fleeing Jewish refugees, again in violation of instructions from Lisbon. It is estimated that the number of visas issued by Mendes runs into the thousands. To his aides, he stated: “My desire is to be with God against man, rather than with man against God.”

Upon his return to Portugal, Mendes was summarily dismissed from the diplomatic services and a disciplinary board also ordered the suspension of all retirement and severance benefits. He countered with appeals to the government, the Supreme Court and the National Assembly for a new hearing of his case – but to no avail. Bereft of any income, and with a family of 13 children to feed, Mendes was forced to sell his estate in Cabanas de Viriato. When he died in 1954, he had been reduced to poverty. Two of his children were helped by the Jewish welfare organization Hias to relocate to the United States. In 1966, he was posthumously awarded the title of “Righteous Among the Nations,” by Yad Vashem, and a tree planted in his name in the Avenue of the Righteous. In 1987, President Mario Soares of Portugal awarded Mendes the Order of Liberty, and publicly apologized to his family for the injustice against the man perpetrated by the previous government. Finally, in March 1988, Aristides de Sousa Mendes was official restored to the diplomatic corps by unanimous vote in the Portuguese National Assembly. Recently, the Portuguese government decided to create a memorial and learning center in the name of Mendes, and ordered damages to be paid to his family. In 1988, Mendes was awarded the Israeli commemorative citizenship, and in 1998, his name and picture appeared, together with other diplomats recognized by Yad Vashem as Righteous, on a special stamp issued by the Israel Philatelic service.
After his dismissal, Mendes reportedly told Rabbi Kruger (whom he met again in Lisbon): “If thousands of Jews can suffer because of one Catholic (i.e., Hitler), then surely it is permitted for one Catholic to suffer for so many Jews.” He added: “I could not have acted otherwise, and I therefore accept all that has befallen me with love.”