A distinguished Freemason of the United States, who was born at Chester, in New Hampshire, September 4, 1800, and died at the City of Washington, where he had long resided, on August 12, 1870. He was initiated into Freemasonry in 1825, and during his whole life took an active interest in the affairs of the Fraternity.

He served for many years AS General Grand Secretary of the General Grand Chapter, and Grand Recorder of the Grand Encampment of the United States. In 1846, soon after his arrival in Washington, he was elected Grand Master of the Grand Lodge of the District, a position which he repeatedly occupied. In 1859, he WAS elected Grand Master of the Templars of the United States, a distinguished position which he held for six years, having been reelected in 1862. His administration, during a period of much excitement in the country, WAS marked by great firmness, mingled with a spirit of conciliation. He was also a prominent member of the Ancient and Accepted Scottish Rite, and at the time of his death was the Lieutenant Grand Commander of the Supreme Council for the Southern Jurisdiction of the United States.

Brother French was possessed of much intellectual ability, and contributed no small share of his studies to the literature of Freemasonry. His writings, which have not yet been collected, were numerous, and consisted of Masonic odes, many of them marked with the true poetic spirit, eloquent addresses on various public occasions, learned dissertations on Masonic law, and didactic essays, which were published at the time in various periodicals. His decisions on Templar Law have always been esteemed of great value.

The capital of this district, Snaky, on the west coast of Africa, has one Lodge, No. 468, which is controlled by the Grand Lodge of France, since 1916, and is named L’Etoile de Guinée, meaning the Star of Guinea.

Between 1740 and 1815, almost constant warfare between France and Britain resulted in a large number of French prisoners of war, who, from 1759 onwards, established Masonic Lodges, working without Warrant or authority. Freemasonry was exceedingly popular with the army of France and, while some French officers visited and joined the local Lodges in England where they were being held, most of them belonged to these French Prisoners’ Lodges conducted by themselves (see French Prisoners’ Lodges, an account of twenty six Lodges established by them in England and elsewhere, John T. Thorp, 1900, Leicester, England).

The French term is Rite Francais ou Moderne. The French or Modern Rite is one of the three principal Rites of Freemasonry. It consists of seven Degrees, three symbolic and four higher, namely,

This Rite is practiced in France, in Brazil, and in Louisiana. It was founded in 1786 by the Grand Orient of France, who, unwilling to destroy entirely the advanced Degrees which were then practiced by the different Rites, and yet anxious to reduce them to a smaller number and to greater simplicity, extracted these Degrees out of the Rite of Perfection, making some few slight modifications. Most of the authors who have treated of this Rite have given to its symbolism an entirely astronomical meaning. Among these writers, we may refer to Ragon, in his Cours Philosophiquc, as probably the most scientific..

Ragon, in his Tuileur Géneral, meaning Handbook to the Degrees (page 51 ), says that the four Degrees of the French Rite, which were elaborated to take the place of the thirty Degrees of the Scottish Rite, have for their basis the four physical proofs to which the recipiendary submits in the First Degree. And that the symbolism further represents the sun in its annual progress through the four seasons. Thus, the Elect Degree represents the element of Earth and the season of Springs the Scottish Master represents Air and the Summer; the Knight of the East represents Water and Autumn; and the Rose Croix represents Fire; but he does not claim that it is consecrated to Winter, although that would be the natural conclusion.

The original Rose Croix was an eminently Christian Degree, which, being found inconvenient, was in 1860 substituted by the Philosophic Rose Croix, which now Id forms the summit of the French Rite.

Grimme, in his Deutsche Mythology (pages 191, 279), traces the name Freia through the ancient Teutonic dialects and explains it to signify plenty and beauty (see Thorpe, Northern Mythology, volume i, pages 197-8, for further information). The column or pillar set apart to the goddess Frey in the temple of Upsala became the pillar of beauty or plenteousness.

Brother Fort says, in his Antiquities (chapter ”7) the three divinities in the Norse temple at Upsala, in Denmark, Odin, Thor, and Frey, were typical supports of the universe Wisdom, Strength, and Beauty-or the three of the ten columns in the Hebrew Sephiroth, in the Jewish philosophy, designated as Sapientia, Pulchritudo, and Fundamentum, which, like the three columns existing in a Lodge of Freemasons, symbolize the moralistic pillars of the world, represented by the Lodge itself. An additional significant fact confronts us at this point: the column of Beauty or Plenty, originally emblematic of Frey, is situated in the south of the Lodge. Masonic symbol-sheaf of grain-always suspended above that station, denoted plenteousness. Freia may also be comparatively described as the Scandinavian Isis, the principal goddess of Egyptian mythology.

Societies first established toward the end of the eighteenth century, in England, for the relief of mechanics, laborers, and other persons who derived their support from their daily toil. By the weekly payment of a stipulated sum, the members secured support, and assistance from the society when sick, and payment of the expenses of burial when they died. These societies gave origin to the Odd Fellows and other similar associations, but they have no relation whatever to Freemasonry.

Brother W. Wonnacott (on page 45, Transactions, Quatuor Coronati Lodge volume xxvii 1914) mentioned a Society conducted as a club for mutual benefit, which in 1737 met at the White Swan tavern in New Street, Covent Garden, London, and went by the name of the Friendly society of Free and Accepted Masons (see also Miscellanea Latomorum, August, 1913, page 13).

The Sixth Degree of the system practiced by the Grand Lodge of Sweden. It is comprehended in the Degree of Knight of the blast and West.

The Fifth Degree of the Rite of African architects

Leslie, in 1741, delivered the first discourse on Friendship, as peculiarly a Masonic virtue. He was followed by Hutchinson, Preston, and other writers, and now in the modern lectures it is adopted as one of the precious jewels of a Master Freemason. Of universal friendship, blue is said to be the symbolic color. “In regular gradation,” says Munkhouse (Discussions i, 17), “and by an easy descent, brotherly love extends itself to lesser distinct societies or to particular individuals, and thus becomes friendship either of convenience or personal affection.” Cicero says, “Amicitia nisi inter bonos non potest,” ‘meaning, “Friendship can exist only among the good.”

A fund over which the Grand Master of the United Grand Lodge of England exercises exclusive control. It originated with a sum of £2,730 subscribed by the Craft in 1870, when the Earl of Zetland retired from the Grand Mastership, and is known as the Zetland Fund.

fund established in 1727 by the Grand Lodge of England, and solely devoted to charity. The regulations for its management are as follows: Its distinction and application is directed by the Constitutions to be monthly for which purpose a Board of Benevolenec is holden on the last Wednesday of every month except December, when it is on the third Wednesday. This Lodge consists of all the present and past Grand Officers, all actual Masters of Lodges, and twelve Past Masters.

The Brother presiding is bound strictly to enforce all the regulations of the Craft respecting the distribution of the fund, and must be satisfied, before any petition is read, that all the required formalities have been complied with. To every petition must be added a recommendation, signed in open Lodge by the Master, Wardens, and a majority of the members then present, to which the petitioner does or did belong, or from some other contributing Lodge, certifying that they have known him to have been in reputable or at least tolerable, circurnstances, and that he has been not less than five years a subscribing member to a regular Lodge.

FUNDS OF THE LODGE

The funds of the Lodge are placed in the keeping of the Treasurer, to whom all moneys received by the Secretary must be immediately paid. Hence each of these officers is a check on the other. And hence, too, the Thirty-nine Regulations of 1721 say that the Grand Treasurer should he “a Brother of good worldly substance” (see Constitutions, 1723) lest impecuniosity and the urge of poverty should tempt him to make use of the Lodge funds .

A word in the advanced Degrees, whose etymology is uncertain, but probably from the Arabic. It is said to signify the Angel of the Earth.

FURNITURE OF A LODGE

The Bible, Square, and Compasses are technically said to constitute the furniture of a Lodge. They are respectively dedicated to God, the Master of the Lodge, and the Craft. Our English Brethren differ from those in the United States in their explanation of the furniture. Brother George Oliver gives their illustration, from the English lectures (in his Landmark I, 169) as follows:

The Bible is said to derive from God to man in general because the Almighty has been pleased to reveal more of His divine will by that holy book than by any other means. The Compasses, being the chief implement used in the construction of all architectural plans and designs, He assigned to the Grand Master in particular as emblems of his dignity, he being the chief head and ruler of the Craft. The Square is given to the whole Masonic body, because we are all obligated within it, and are consequently bound to act thereon.

But the lecture of the early part of the eighteenth century made the furniture consist of the Mosaic Pavement, Blazing Star, and the Indented Tarsel, while the Bible, Square, and Compasses were considered as additional furniture.

An officer of the Grand Orient of France in the beginning of the nineteenth century. In 1810, he published, and presented to the Grand Orient, a Geographical Chart of the Lodges in France and its Dependencies. He was the author of several memoirs, dissertations, etc., on Masonic subjects, and of a manuscript in French entitled Nomenclature Alphabétiquc des Grades, or Alphabetical List of Names of Degrees. Brother George Oliver in his Landmarks (95), Says that he promul gated a new system of sixty-four Degrees. But he seems to have mistaken Fustier’s catalogue of Degrees invented by others for a system established by him self. No record can be found elsewhere of such a system . Lenning says (Encyclopedie der Freimaurerei, the German for Encyclopedia of Freemasonry) that Fustier was a dealer in Masonic decorations and in the transcription of rituals, of which he had made a collection of more than four hundred, which he sold at established prices.

Lorenzo de Medici said that all those are dead, even for the present life, who do not believe in a future state. The belief in that future life, it is the object of Freemasonry, as it was of the ancient initiations, to teach (see Immortality of the Soul).

An ancient symbol well known in the science of coats of arms and the other details of heraldry. It is sometimes known as the Crux dissimulata, found in the catacombs of Rome, and forms one of the symbols of the Degrees of Prince of Mercy, Scottish Rite System. It is a form of the Swastika (see Jaina Cross) 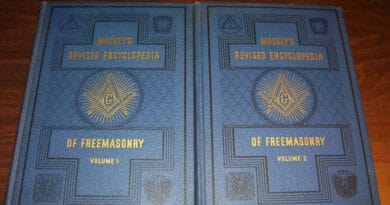 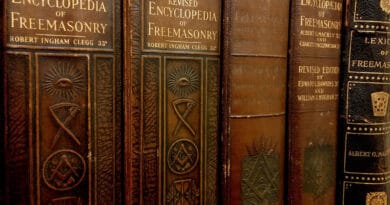 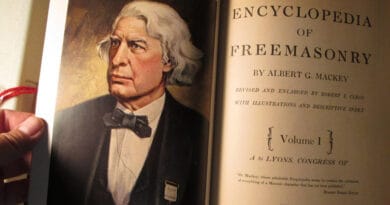